After a successfull second year with Borgore, Grandtheft, Kayzo, MAKJ, Malaa, Mercer, Moksi, San Holo and many more – Area 4 is ready for the third round!

You can look forward to a big lineup all around trap music and the incomparable atmosphere of Zrce Beach.

Area 4 takes place in all 4 clubs at Zrce Beach. 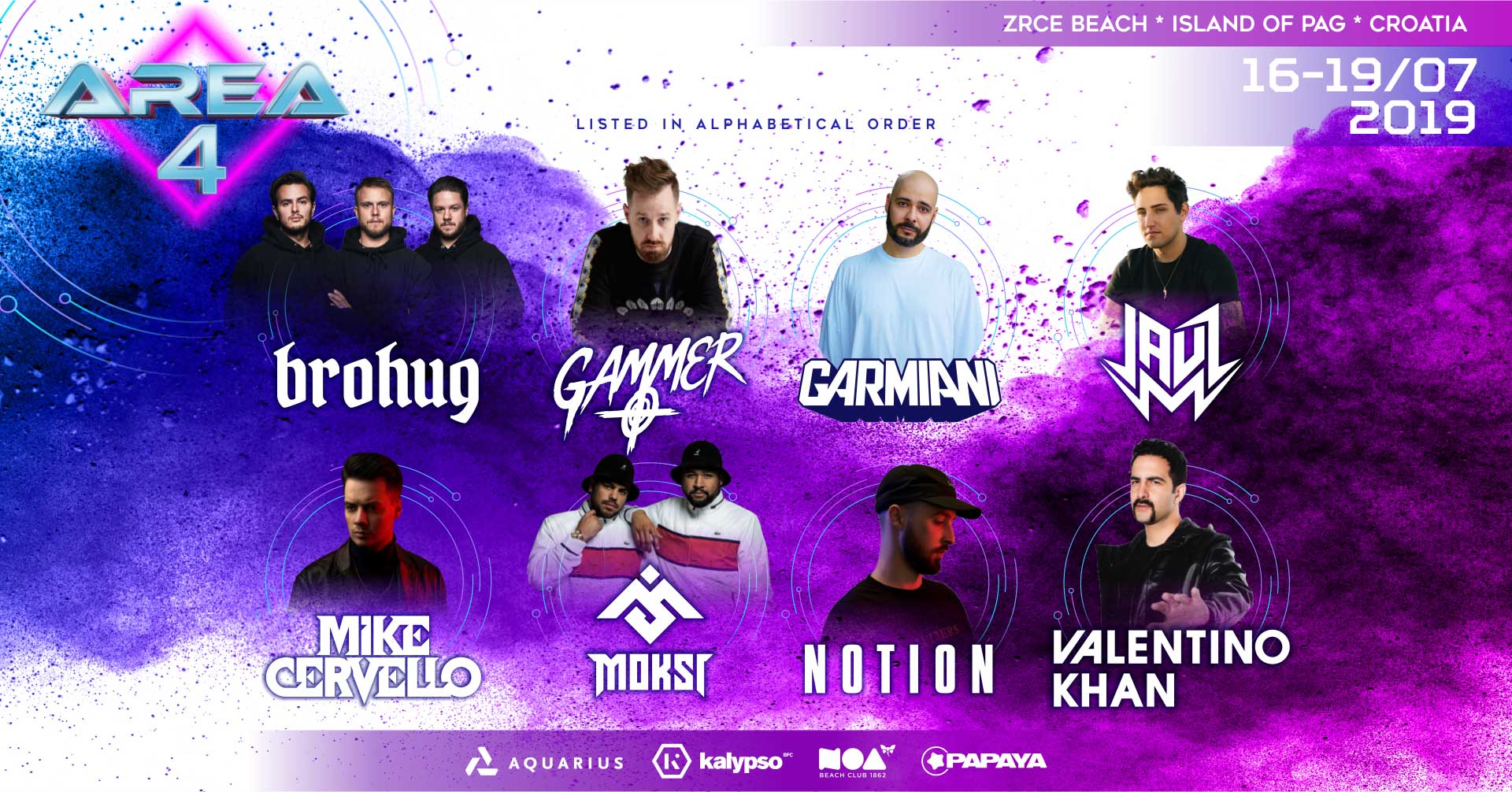 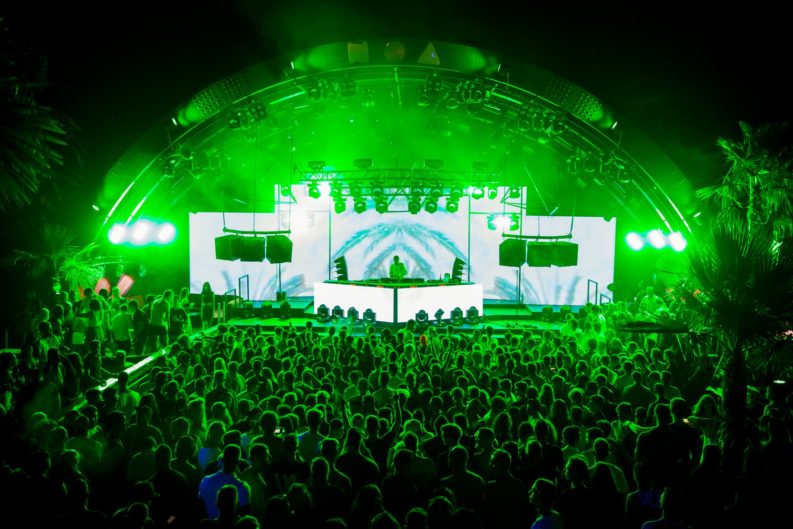 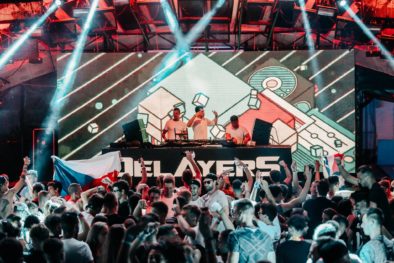 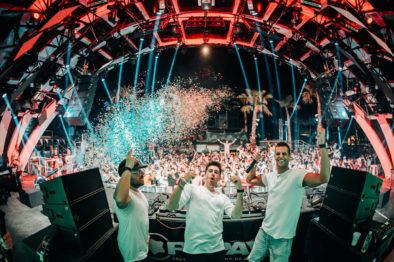 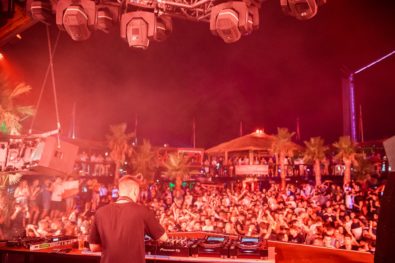 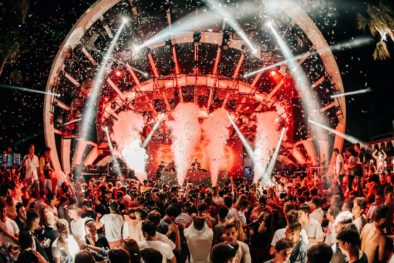 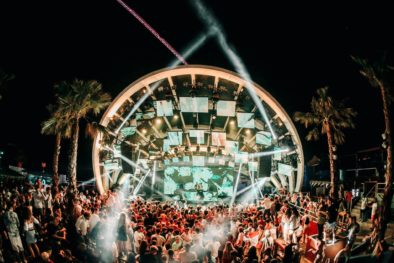 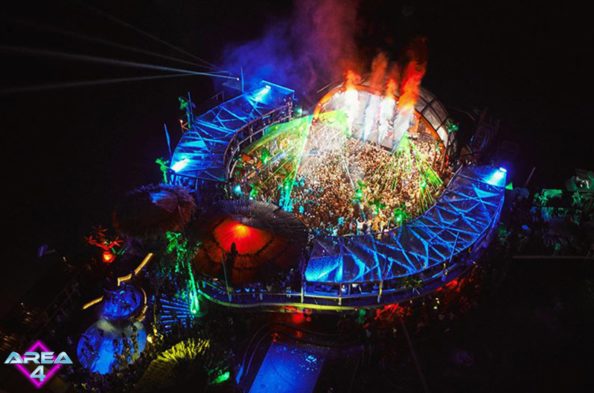 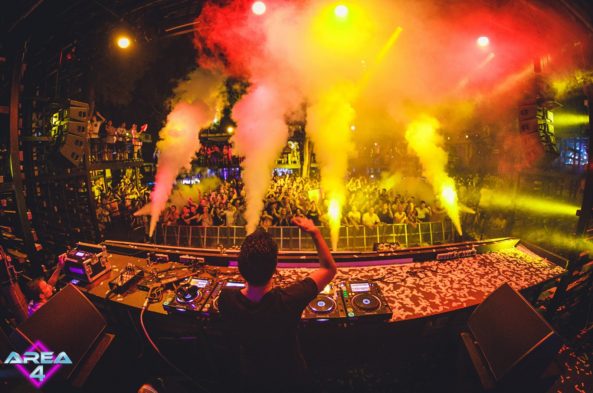 Mackenzie Johnson, best known by his stage name MAKJ, is an American DJ. He has released a number of singles as a solo artist since 2012, as well as a large number of collaborative singles with artists such as Hardwell, Lil’ Jon, and M35.

Yosef Asaf Borger was born in Holon and raised in Tel Aviv, Israel. He is the founder of Buygore Records and former drummer of Israeli deathcore band Shabira. He is also part of the dubstep duo Alphamale Primates, which consists of him and Tomba. Self-described as “Gorestep”, his music incorporates triplet drum patterns with heavy metal influences. Some songs have been compared to horror movies, farm animals, and sex. He has released tracks under Dim Mak Records, Spinnin’ Records, Sumerian Records, Shift Recordings and also his own label Buygore. In 2012 he released the single “Decisions“, with back-up vocals provided by Miley Cyrus.

Yellow Claw are a producer and DJ duo from Amsterdam. Jim Aasgier and Nizzle gained notoriety as Yellow Claw in 2010 for hosting a night party at the famous Amsterdam nightclub Jimmy Woo. They released multiple singles throughout 2012 and 2013 which all charted well in the Dutch and Belgian charts. The music videos for ‘Krokobil’, ‘Nooit Meer Slapen’, ‘Last Night Ever’ and ‘Thunder’ went viral on YouTube gathering over 4 million views and shares. Yellow Claw were soon in demand, performing at festivals such as Sneakerz Festival, Dirty Dutch Festival and Solar Festival.

2015 saw the release of their debut studio album, Blood for Mercy, the lead single of which ‘In My Room’ features producer DJ Mustard and rapper Tyga. They are recognised for integrating many different styles into their music such as trap, dubstep and hip hop. Yellow Claw will be performing at the Area 4 Festival on the 19th July 2017 in the Aquarius club on Zrce Beach, Croatia.

‘WE ARE GTA’ scheduled for AREA-4 festival

The American electronic music duo WE ARE GTA is scheduled to hit the stage at the Area-4 Festival set to be held at Zrce Beach in Croatia next summer. The name WE ARE GTA is an acronym of ‘Good Times Ahead’ and is a duo made up of music producers, Matt Toth and Julio Mejia.

Having WE ARE GTA at Area-4 means fans will be treated to mixes of trap music, electro house, house and hip-hop genres. Their music caught the attention of acclaimed music producer Diplo who provided them with the much-needed exposure once he collaborated with them on his 2012 EP. Since then they’ve toured the globe with musicians such as Rihanna and Calvin Harris. They have performed at major festivals such as Lollapalooza, Coachella, Made in America and Tomorrowland.

Before gaining a following they started out by releasing dozens of remixes of popular songs to the public. They have collaborated with Diplo on his 2012, ‘Express Yourself’ EP and Martin Solveg on a remix of Rick Ross’ and Jay Z’s “Moving Bass”; another Collaboration with Solveg called “Intoxicated” achieved mainstream success peaking at position 5 on the UK singles chart. They managed to release three EPs over the course of 2015 called “Death to Genres” as three different volumes. What makes hosting WE ARE GTA at Area-4 a very big deal however, is that it will just be the perfect stage to perform their latest album, “Good Times Ahead”.

One of the hottest DJ talents around, Jillionaire, will be appearing at the Area 4 Festival in Zrce this summer. Jillionaire is one of the three members of top EDM group, Major Lazer, along with Diplo and Walshy Fire. He was born in Trinidad & Tobago as Christopher Leacock, where he began DJing as a teenager for sound systems like Zion One and Radioactive. He also opened a bar in Trinidad, but decided to concentrate on music. Jillionaire brings a great Caribbean vibe that fuses soca, dancehall and reggae with other musical influences. He has toured extensively around the world and appeared at many big music festivals, including Coachella, South by Southwest and Electric Daisy Carnival.

He has also hosted Chicken and Beer parties in Miami at the Winter Music Conference since 2010. Jillionaire is responsible for the party anthem ‘Fresh,’ which he produced in collaboration with Salvatore Ganacc, and has worked with many other top artists such as Sanjin, T.O.K., Phat Deuce and Swick. His set list is known for its high energy and includes big Major Lazer hits like ‘Lean On’ and ‘Light It Up.’ Jillionaire recently launched his own record label, Feel Up Records, which is based in Brooklyn and includes Saint Ballantine, Tangina Stone and BOYSLASHFRIEND on its roster of artists.

Stoltenhoff will be playing at the Area 4 Festival on Zrce Beach Croatia. This 27 year old producer and artiste from Denmark has been making waves along with fellow entertainers Nonsense and Yellow Claw. His musical style encompasses dance and electronic rhythms. Songs like “Unga Unga” and “JumpyHoff” have helped to make his music known around the world.

The artiste has often been associated with three record labels during the course of their career. These are Ones To Watch Records, Rimbu and the Barong Family, which is based in Amsterdam. Their popular Guerilla mix was released with Wiwek label, Rimbu.

The original “Banana Ice Cream” mix and “Tuddle McBuddle” were released with Ones To Watch Records. “Belly Dancer” was completed with the Barong Family. Fans will be able to hear all of these songs when Stoltenhoff appears at Area 4 in July.

Collaborations with other artistes have proved successful and Stoltenhoff has made inroads into the music industry with “Thunderstorm”. He completed this song with Holly. “Thunderstorm” is just what the name suggests. An energetic blend of beats that will get fans moving whether they are in their car or at Zrce.

Stoltenhoff will play alongside Yellow Claw, fellow members and founders of the Barong Family. Listeners who enjoy hip hop, house or progressive music will be likely to have a great time dancing to any of his songs. Croatia promises to be a blast with his singles.

Welcome to another dimension!

Croatia’s most popular beach Zrce has over the last decade become one of the most recognizable beaches in Europe. Because of its ideal location on the island of Pag, it has the perfect combination of paradise surroundings, crystal clear sea and famous party festivals.

Festival will bring you a line up OUT OF THIS WORLD!

Line up, ticket & travel package informaton will be announced soon!